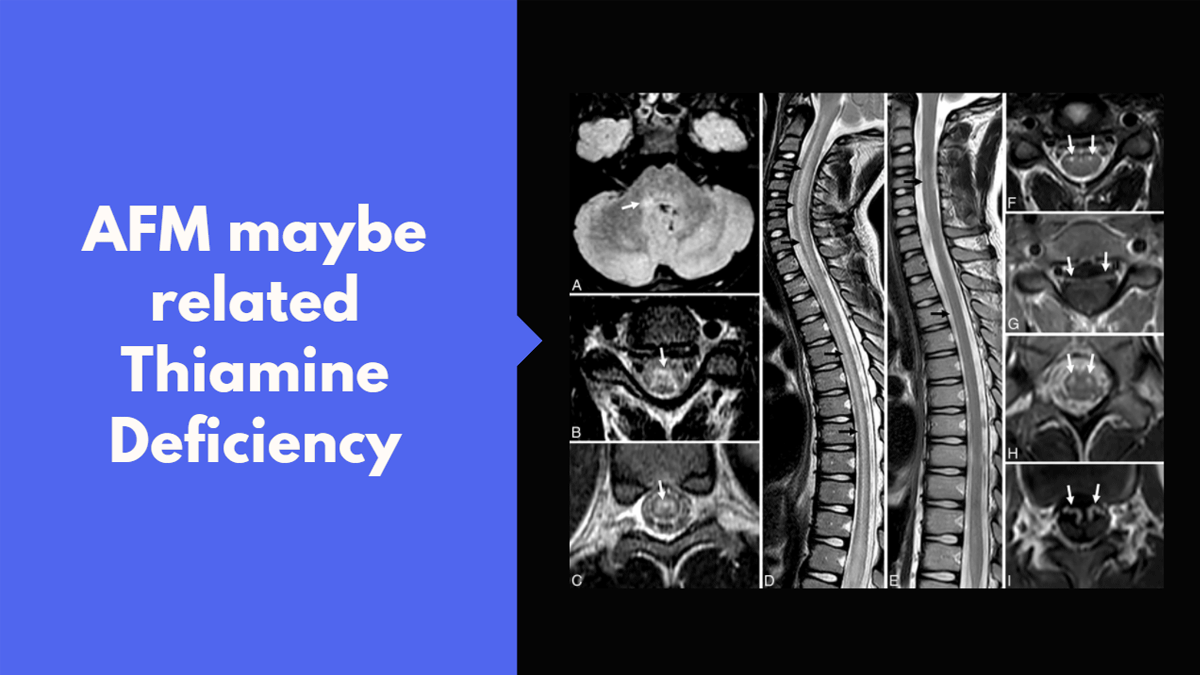 Many of the expressions of AFM relate with the impacts of Thiamine Deficiency this article goes into the commonalities of AFM and thiamine and how it may relate.

What is Enteroviruses EV-D68

Acute flaccid myelitis (AFM) is a syndrome characterized by acute flaccid paralysis (AFP) and gray matter spinal cord lesions on magnetic resonance imaging (MRI). After the introduction of the term AFM in 2014, more than 500 patients, predominantly children, have been recognized both in- and outside Europe

In August 2020 the USA the CDC has issued a warning about Acute flaccid myelitis (AFM) is an uncommon, but life-threatening neurologic condition that affects mostly children and can lead to permanent paralysis.

Enteroviruses, particularly EV-D68, are likely responsible for the increase in cases every two years since 2014.

First identified in California in 1962, enterovirus D68 (EV-D68) is one of more than 100 non-polio enteroviruses.

Where does Enteroviruses EV-D68 come from?

While they have found the infection to be highly contagious studies done into the origin is still largely unknown “In this series of patients identified in California from June 2012 through July 2015, clinical manifestations indicated a rare but distinct syndrome of acute flaccid paralysis with evidence of spinal motor neuron involvement. The etiology remains undetermined, most patients were children and young adults, and motor weakness was prolonged.” 1

A Study on recovery notes with AFM patients. 2

Large EV-D68 Outbreak happened in 2014. How many people got sick?

In summer and fall 2014, the United States experienced a nationwide outbreak of EV-D68 associated with severe respiratory illness. From mid-August 2014 to January 15, 2015, CDC or state public health laboratories confirmed 1,395 people in 49 states and the District of Columbia with respiratory illness caused by EV-D68. Almost all of the confirmed cases were among children, many whom had asthma or a history of wheezing. Additionally, there were likely many thousands of mild EV-D68 infections for which people did not seek medical treatment and/or get tested. This was the first documented nationwide outbreak of EV-D68. Although illness associated with EV-D68 is not notifiable, circulation of this virus occurs most often in late summer and fall, which is the typical enterovirus season.

CDC received about 2,600 specimens for enterovirus testing during 2014, which was substantially more than usual. About 39% of those tested positive for EV-D68.

In 1979 they found an association between enterovirus infections and type 1 diabetes. In 2009 they found in experimental models, like enterovirus-infected mice or in vitro-cultured beta cells, have provided important information about possible mechanisms, but still it is not known how beta cells are destroyed in human beings. The ongoing prospective studies will answer many open questions, and should the association still hold true, intervention trials will be needed to confirm causality. Even if enterovirus infections were not associated with all diabetes cases but rather with a subgroup of them, this would offer attractive possibilities to prevent the disease or part of it, for example, by an enterovirus vaccine. – 3

As we have already established the source of the infection still have not been found, what is this mystery illness relates to a thiamine induced deficiency let me explain.

In veterinarian medicine it is know as Polioencephalomalacia 4 ( PEM ), which causes polio like symptoms and has been on the rise recently.

“Polioencephalomalacia (PEM) is an important neurologic disease of ruminants that is seen worldwide. Cattle, sheep, goats, deer, and camelids are affected. The term PEM denotes a lesion with certain gross and microscopic features that are not specific for a particular etiology or pathogenesis. Historically, PEM has been associated with altered thiamine status, but more recently an association with high sulfur intake has been observed. “ 5

The altered thiamine status is called thiaminase-induced diseases which means the food is acting to block absorption of thiamine or destroying it in the gut before it can be taken up.

Sulfur is added to the corn mash in the production of ethanol.
The corn mash known as distillers grain, which is known to be high in sulfur, is then fed to cattle ( dairy products and meat ), pigs and chickens ( eggs ) which are consumed by humans.

Children consume more of these products then adults in the way of milk and meats as fast foods and school lunches and at home as “lean” ground meat.

In an article in 2014 one farmer on one North Carolina dairy farm is finding his cows are getting sick with “cows had neurologic signs,” while others had “severe foot problems” and “bleeding from the nose.” he has lost 325 of his 500 cattle in a 4 year period, he believes it was the sulfur added into the grain he feeds his cows. 6

I do find it interesting when it was so bad for that farmer in 2014 is the time the outbreak of AFM was first seen.

In Australia they pointed out that PEM caused by sulphur poisoning has not been proven in WA yet, but is becoming common elsewhere in the world. It may occur when dietary sulphur exceeds 0.4% of total diet. For example, this might occur when gypsum or ammonium sulphate is included in a feedlot ration, especially when stock has access to water with high sulphur content. And sadly Thiamine injections treat the thiamine deficiency, but will not fix the problem of thiaminase-producing bacteria in the rumen, meaning there is the potential for relapse. Providing the animal with a high-quality hay diet and an oral supplement of thiamine will help significantly in returning thiamine availability in the rumen to normal. 7

In 2014 Dr Anne Fawcett treated a thiamine deficient cat fed exclusively on supermarket bought kangaroo meat packaged for pets. The food was tested and found to have concentrations of sulphur dioxide almost double that allowed for human consumption. Sulphur dioxide is a known cause of thiamine deficiency in humans and animals.

Some pet food suppliers treat products with high levels of sulfur dioxide to preserve the meat and to disguise signs of petrification.

“A one-off meal won’t hurt but over time these levels of sulphur dioxide cause vitamin b deficiency which causes brain damage.”
Dr Anne Fawcett

“I thought I was doing the right thing and feeding her nice ‘roo meat and it nearly killed her. My dog and cat are like children to me, so it was horrific.

“I am angry beyond imagination to find I had done this to my cat,” she said. 8

While the manifestation of AFM is infectious the origins of AFM is unknown, I propose that it may be bacteria infection run out of control from a thiamine imbalance which may be caused by an imbalance in our food supply not seen in the USA until 2014, coupled with a child’s low immunity to enteroviruses and today’s forms of processed foods which all require thiamine to process may be getting worse with imbalances of minerals found in food sources today.