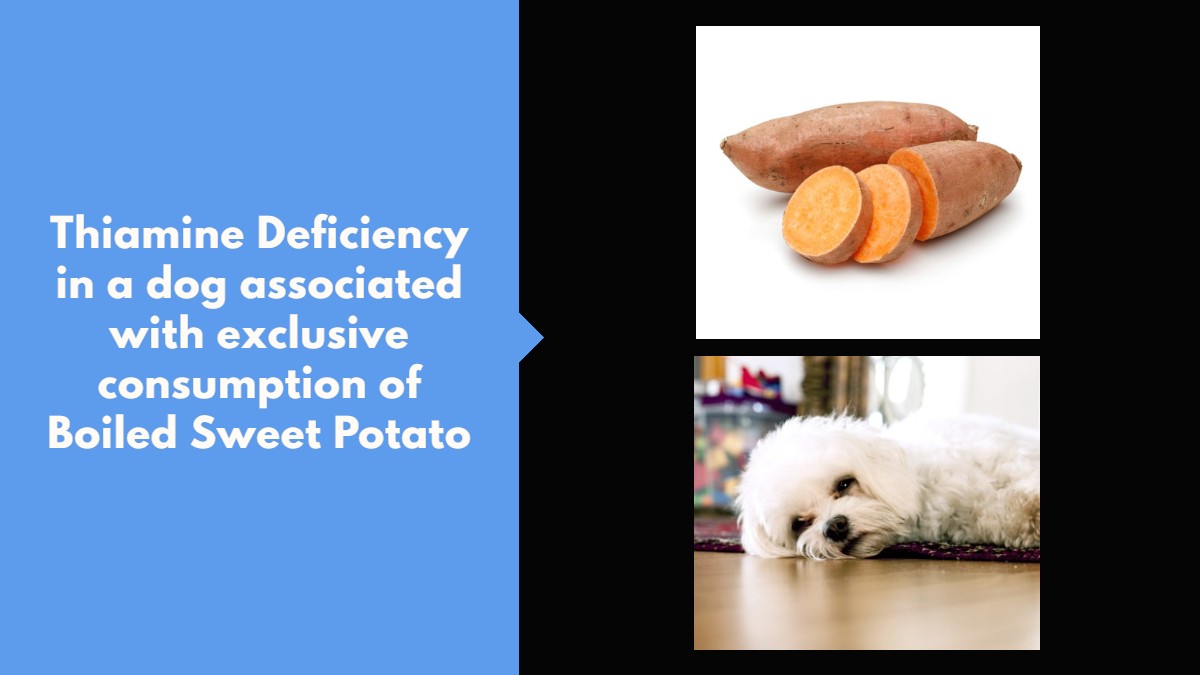 Dogs and cats largely depend on the dietary intake of thiamine to achieve thiamine requirements that the body needs to function normally.

Many commercial pet diet manufacturers follow these nutritional recommendations when formulating pet diets. However, unconventional diets such as unbalanced foods, raw foods and homemade diets are not nutritionally adequate to meet the dietary thiamine recommendations, which in turn increases the risk of developing thiamine malnutrition.

The Maltese Terrier dog was presented to a referring veterinarian with a 3‐day history of:

The owner noticed a progressive deterioration of the neurologic signs over the preceding 3 days. Symptomatic treatment before the presentation with phenobarbital (2 mg/kg twice a day orally) failed to alleviate the seizures.

The dog had been generally healthy until the occurrence of acute seizure episodes. He had been fully vaccinated and dewormed, with no history of trauma or exposure to toxins. Further medical enquiry with the owner revealed that the dog had been fed an almost exclusive diet of boiled sweet potato (Ipomoea batatas) as a primary diet source for 4 weeks with an average consumption of approximately 100–150 g (about one to one and a half small whole sweet potatoes) per day due to his picky eating behaviours (chronic food refusal). Furthermore, this food refusal had gradually worsened over time.

Neurological examination identified generalized ataxia with dysmetric movement and an inability to bear full weight on the hind limbs.

There was no cytological CSF evidence of relatively well‐recognized CNS disorders (e.g. inflammatory, neoplastic and infectious causes). Therefore, based on the inadequate diet history, the hyperlactatemic condition (Type B hyperlactatemia) and the abnormalities seen on MRI, a presumptive diagnosis of thiamine deficiency was established in this patient.

To confirm the presumptive diagnosis of thiamine deficiency, the whole blood sample was submitted to evaluate the blood thiamine concentration. Thiamine content was measured by the high‐pressure liquid chromatography (HPLC) method with the assistance of a commercial laboratory (Neodin Vetlab, Seoul, Korea). The HPLC is a preferable and reliable method of thiamine analysis in humans and animal studies, which helps by directly measuring the phosphorylated form of thiamine (thiamine pyrophosphate, TPP) within RBCs.

Following the MRI scan and the blood sampling, a therapeutic trial using thiamine supplementation with dietary intervention was performed on the same day to evaluate the associated response and to rapidly recover the clinical signs.

Sweet potato supplementation was immediately stopped prior to starting the treatment.

Thiamine supplementation was started with oral vitamin B complex  at a total thiamine dose of 45 mg once a day for a month.

Furthermore, the dog’s diet was temporarily changed to a good‐quality prescribed dog food containing high levels of protein and fat.

A rapid improvement in neurological signs was seen with the initiation of thiamine supplementation and diet change. There were no additional seizures after being discharged from the hospital. Furthermore, the symptoms of anorexia improved along with the normalization of previous metabolic derangement with the treatment, which consequently accelerated the recovery rate of the remaining neurological abnormalities. Finally, no residual neurological deficits were observed at 3 days after continuous management.

Two weeks after starting thiamine supplementation and dietary intervention, there were no abnormalities on physical and neurological examination. Repeated blood examination showed that the previously observed biochemical abnormalities had entirely normalized.